In the News: Editorials & Articles

In the News – Editorials & Articles by Gwen

Gwen Lachelt’s June 1, 2016 statement on the GCC King Coal Mine application, June 1, 2016: The GCC coal mine is an important part of our community. I appreciate all of the coal mine workers who have been in the hearing the last two days. It is a strong show of support for GCC and I know you all represent not only many other workers who couldn’t be here, but also many family members whose livelihoods depend on the mine. I appreciate how respectful you have been of this process. I also appreciate the residents of County Road 120 and the County Road 120 area who presented their testimony of what it is like to live on or near the road with hundreds of trucks passing by six days a week.  The safety concerns and the impacts of noise and dust are very real. As county commissioners, our primary responsibility is protecting the public health, safety welfare and the environment. We are charged with striking a balance between the company’s right to operate and the public’s constitutional right to peaceful enjoyment of their property, and their health, safety and welfare.

Without use of the county road, the coal mine is not a viable operation. The residents of this area have suffered and we must strike a balance.

I commend the staff for their perseverance in developing a Road Improvement Agreement with GCC. The county made a grave mistake in 2007 in telling GCC it did not need a land use permit. It then took three more years for the county to send GCC a letter stating the company did indeed need a permit. That was in 2010. It is 2016. By approving the permit today, I believe we will strike a path forward. It won’t be a perfect path but it is a step that will improve the safety of the road and that will minimize the impacts of noise and dust on the residents.

At my request and the agreement of the County Commissioners, until the Phase 1 improvements are complete, that GCC limit truck traffic on CR 120 to 55 trucks per day If the company believes it needs 80 trucks a day before the Phase 1 improvements are complete, the company will temporarily detour 25 trucks per day CR 120 south. GCC agreed on the record to this limitation.

Hold mining companies responsible for cleanups, Denver Post Editorial by Gwen Lachelt
The American people are about to inherit another costly Superfund site, courtesy of inadequate and outdated federal mining regulations. Earlier this month, the EPA recommended that the Gold King Mine in southwest Colorado, which dumped a torrent of mine waste into the Animas River last year, should be added to the list of the nation’s most toxic clean-up sites. Full article

When a river runs orange, New York Times Editorial by Gwen Lachelt
Durango, Colo. – The recent mining pollution spill in my corner of Colorado – La Plata County – is making national news for all the wrong reasons. Beyond the spill and its impact in everyone downstream, the underlying causes are far more worrisome and dangerous than just a mistake made by the Environmental Protection Agency. Full article

Partnerships and broad scope needed for mine cleanup, Durango Herald Editorial by Gwen Lachelt
When the now infamous photo of three kayakers paddling in an other-worldly orange-yellow Animas River flooded the media on Aug. 6, it was the first time most Americans had ever given any thought to mine waste. It was an ironic 21st century version of a gold rush: shocking, horrifying and disgusting. For those of us who live in Southwest Colorado though, dealing with the legacy of 19th and 20th century hard-rock mining has been a difficult, expensive and intractable challenge for decades. Full article

Put simply, we are wasting American energy and local resources for absolutely no benefit, Denver Post Editorial by Gwen Lachelt
American taxpayers own the resources on and under our federal lands, and we deserve better. We should not allow our natural gas to be burned and wasted while we pay more and more for the natural gas we need in our homes during harsh winters. According to the WVP report, Colorado has lost out on over $35 million since 2009 because companies have the right to simply burn off our natural gas without paying for it. Full article

Gas and local control – Challenge is balancing citizen concerns with industrial use, Durango Herald Guest Editorial by Gwen Lachelt
As a La Plata County commissioner, I was shocked to see the recent ad in The Durango Herald undermining the notion of local control in decisions about land-use policy when it comes to gas-and-oil development. I clearly understand the need for a balanced, common sense energy policy, but I strongly oppose the state interfering in the affairs of local officials, who have been elected specifically to protect the health, safety, property values and long-term economic vitality of their communities. Full article 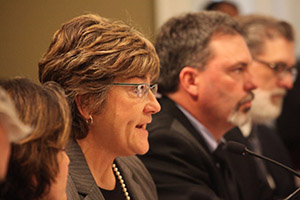 “I can take the long view” Durango Herald Article